I have to assume I’m not the only professor in the social sciences who struggles to help undergraduate students understand a model-based approach to explaining the world. We certainly throw enough theories and models at them! Their textbooks are filled with models we ask them to learn and then apply to explain real world events. I’m never happier then when I get to introduce them to a new theory in class using a simulation or cut-throat battle for bonus points on their next paper (shout-out to the bargaining model of war, two level game style negotiations and principal-agent problems). But I can never quite shake the feeling that they are humoring me without ever really understanding the task or the models themselves in any substantially useful way.

Who can blame them? They come to college after years of being told to memorize facts, and now, here they are in my Introduction to International Relations class being told that there are innumerable contradictory explanations for why ol’ Vladdy Putin is threatening to invade Ukraine and that the answer depends on them selecting a “model” that is clearly ignoring something important they intuitively “know” about the world. Why do I get to tell them that an incomplete explanation in a textbook or journal article is a useful model whereas the incomplete nonsense they see on Facebook is not?

Ok, I don’t have an answer for that but what I do have is an exercise I’ve been refining over the years inspired by the analogy (simile? metaphor? who the hell knows…) of models to maps in the excellent A Model Discipline: Political Science and the Logic of Representations by Kevin A. Clarke and David M. Primo. Long story short, in their telling, models are like maps. We value maps for their usefulness in getting us from A to B and not for their accuracy. We all seem to intuitively understand that maps are partial representations of the world, that they reflect the interests of their designers, that they are designed for some purposes and not others. No sane person gets mad that their subway map doesn’t list all the bathrooms on the third floors of building they pass on their morning commute. And, what goes for maps goes the same for models.

Long story short, early in the semester I have my intro classes draw maps of our campus in class. I then ask the students to walk around reviewing the maps and selecting the “best” one with the promise of extra credit for the “winner.” We then argue for a bit about what “best” means and I transition us to talking about why all maps are inaccurate, but some are useful. I also try to keep this analogy alive during the rest of the term. Whenever I introduce new theories or models I try to do it using the language of a map (e.g. What are the main features of this model? Who is it designed to help? Is it for the individuals walking the streets, groups traveling between cities, etc? Where is it trying to help you go? What are the big features of the world it omits?).

I’m not going to pretend that I’ve cracked the code and that all my students immediately come to grasp the value of thinking with theory, but I like to think this has helped. At the very least it has certainly helped me think about the value and design of useful models.

Stargazer is the single greatest R package I’ve discovered this year (although I think it was the most excellent Jos Elkink who first pointed me to it). stargazer() can turn objects created by many, many R commands into nicely formatted LaTex code. A glorious time saver that I use with only a slight, but very important, tweak:

So, in sum, if you ever meet Marek Hlavac while at Harvard buy him a drink for me.

Useful blog post at orgtheory.net. It consists of a series of pointers from editors at top sociology journals as to what makes for useful comments/review notes when you are asked to review an academic article.

As we in academia have to do this quite a bit, even if just informally helping out a colleague, these are some useful tips to keep in mind. A few that stuck out for me:

“Be developmental – Good reviews suggest solutions to the problems raised. Just saying, “this is bad, this is wrong, I disagree with this, why should I care…” doesn’t really help the authors. Telling them what would solve the problem for you does. If you can’t come up with a tractable solution, you may want to reconsider whether or not you are making a valid criticism, or being too negative and nit-picky. All research has weaknesses. The question is, are these weaknesses fatal, addressable, or just inherent to the theory or methodological approach employed and thus not something the author can address but should be mindful of when drawing inferences and making claims.”

“Start from a happy place – If you approach a review assuming you are going to reject the manuscript odds are you will, because you will focus primarily on information that confirms this expectation. As a reviewer, when I start reading a paper I assume that I’m going to give it an R&R unless the authors convince me otherwise. This approach makes me more open to the positive aspects of the paper and the potential nuggets that can be developed, and which might be overlooked if you are only looking for reasons to reject the manuscript. It may not take long for the authors to convince me to reject their paper, but I’ve also seen some real diamonds in the rough polished into gems because I was open to seeing what the paper might be.”

Let me add my voice to the chorus out there praising the new R GUI, RStudio. It’s swell, and should help new users get to grips with the steep learning curve much quicker. I especially like the fact that it is multi-platform, allows graphics to stack rather than be overwritten and has that nice summary window for visualizing the data you have loaded.

As for me, emacs (plus ESS) remains my tool of choice.

As an add-on to the previous discussion, the New York Times has posted an article discussing the expanded use of interactive “clickers” in lecture halls as a tool for engaging undergraduates. Now we just need the cost to come way down or to develop an Android/iphone app that provides the same functionality.

With a hat tip to Ken Benoit’s blog, This xtranormal.com video should answer any questions you have about the pursuit of a PhD in political science. The truth is painful and wickedly funny.

So you want to get a PhD in political science…

Yale University offers a series of their courses online through their Open Yale Courses program  (videos of lectures, notes, etc.), and the game theory course with Ben Polak is quite good. It’s a nice resource for refreshing one’s memory (or starting from scratch if so needed).

Update: I posted this in a hurry yesterday as I wanted to share the link with colleagues. Let me just add that of the lectures I’ve viewed online, Ben Polak deserves credit for being an excellent lecturer. He’s charismatic (which is always nice) and has some nice tricks for conveying the subject to students (much class participation). On the technical side, the video and sound quality is excellent.

In sum, I would be completely comfortable directing someone, even those completely unfamiliar with game theory and afraid of formal models, to these videos confident that they will get something valuable out of them.

With a hat tip to the Revolutions blog, a FREE introductory book to statistics and probability which illustrates all of its examples in R has been released (free pdf version and pay-for paperback version).

I’ve only skimmed through the first 80 or so pages but must say it looks like a very nicely written introduction to probability, statistics and R itself. This might be a good resource for those teaching Quants I courses.

Let me be the ith person to point to the exceptionally useful ggplots2 package in R. Its default plot settings (as in qplot() ) make for some particularly nice figures.

However, I bring it up now because it provides a slightly more flexible method of rotating axis labels (different from the method used here). GGplot can be a little complicated at first glance (I recommend this nice tutorial) but trust me, it is well worth the investment in time. Below is the creation of a simple histogram using qplot. Note that qplot is stored in an object and then called with “+ opts( )” to tweak the particular settings of interest. It is actually this second command which draws the plot.

> hgram <- qplot(data$test, xlab=””)
> hgram + opts(axis.text.x=theme_text(size=16, angle=40, vjust=.8, hjust=1.01))
In this example the x axis text (labels) are increased in size, tilted 40 degrees counter-clockwise and then vertically and horizontally adjusted. I’ve found this method useful in those cases where just using the “srt” argument might have failed. 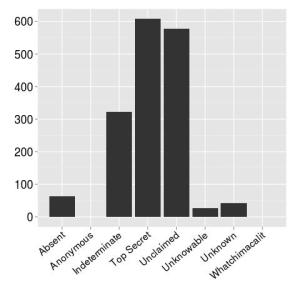 The New York Times had a nice article on Monday examining the costs of energy production for these two low-carbon options of energy generation. If you’re looking for a brief discussion of the state of nuclear reactor financing this is a good place to start.

In essence, capital markets refuse to fund the creation of new nuclear reactors for a plethora of reasons, but this hasn’t stopped many members of Congress and the White House from pushing for astonishingly large subsidy packages and loan guarantees to try and kick-start a new generation of reactors.

I’m not coming down one way or the other on this here, except to say that the goal of powering our economy in as low-carbon a manner as possible is a laudable one, and our efforts to decide where our public investments should go need to take on board all of the relevant information. The full cost of nuclear can only be fairly calculated when all of these subsidies, loan guarantees and potential environmental consequences are included and according to at least a few researchers this amount means that nuclear energy is already far more expensive than solar per kilowatt hour.

Of course, on the other hand, there aren’t enough solar panels in existence (or the materials to make the needed number using current production technologies) to meet our current demands. I never said I had the answer, just that the information was interesting and important…